Inspired by Daphne Wingfield-Derby’s EAWL article on native plants and their potential as wool dyes, Njoro farmer Lorna Hindmarsh collaborated with local community members Nelson Karano and Gathoga Gachuhi to record traditional knowledge on the plants used to dye kiondos (traditional baskets made of chewed bark fibres). For more than a decade they interviewed the tribal elders and collected hundreds of plant samples to work out which produced the best and most colourfast dyes for wool. The highlands of Kenya had proved fantastic land for rearing sheep, so wool was available locally.

Local artesans designed spinning wheels out of old bicycle parts and locally sourced timber offcuts. They built looms, wove carpets from their dyed wool, and sold these throughout Kenya. Lorna’s daughter Jean set up ‘Spinners Web’ in Nairobi, which has expanded into a vibrant space for artisans to sell their hand crafted art. On retirement, Lorna emigrated to Australia but the carpet weaving continued under Jean’s management for a while until she retired to Gilgil to concentrate on her work as an artist. Without anyone managing the spinners and weavers they dispersed and the market for rugs from Njoro slowly faltered and died.

Paddy Nightingale, the administrator of neighboring Kenana Farm, was a keen knitter and toy maker in her spare time. She was approached in 1998 by a small number of women from the once thriving weavers group. These women desperate to feed their families came asking for help. Paddy thought they might apply her knitting and toy-making skills with their spinning expertise to create ‘woolen items’ to sell. To begin with Paddy taught the women to knit, to make simple toys, providing a workspace and sale opportunities locally such as the EAWL Christmas market. The women provided the homespun wool and busy hands. Her close friend Sarah Withey he founder of the Banana Box chain of gift shops in Nairobi saw the potential and encouraged the industrious team to continue making toys beyond Christmas and promised she would help to sell them. Jean O’Meara also committed to support them through The Spinners Web.

The Knitters were set up as an income earning opportunity for rural women, many of whom have their own small-holdings to run. This involves carrying water, cutting firewood, planting beans, harvesting maize etc.  Hand Knitting requires no clean work table, good light or major equipment – the ladies can knit as they walk too and from their fields, whilst waiting for food to cook or even whilst chatting to neighbours.  Time otherwise not utilised to the full could now bring in some much needed cash. Several menfolk also saw opportunity in the knitters and learned to knit and spin wool.

Through the post Christmas dry weather these women continued to knit under the shade of the trees in Paddy’s garden, bringing much needed income to their families through this hard time of year. They could not keep up with the Nairobi orders so a “pass it on” training scheme enabled more and more knitters to join the scheme.

When the rains came in April, Paddy cleared out and extended her back porch to give the growing team somewhere to sit during inclement weather, then the old chicken shed was converted into a shelter too. Such rapid and unplanned growth was becoming unmanageable, so her husband Bruce bought a couple of forty foot shipping containers as stores and built a roof between them as a workspace. The Knitters now numbered over sixty women and was still growing.

During all this development there was a lot of pressure to turn the Knitters into a registered charity. Doing this would have enabled donors to give financial support to this amazing inspirational group, but this idea was rejected as this would take away from the self-help ideals of which they were so proud. Donor money always seems to come with strings attached and the Knitters wished to continue to develop in their own sustainable way. They looked into setting up a formal cooperative but this business model lacks accountable leadership and all too often has a reputation of becoming politically led. Eventually it was decided to set Kenana Knitters up as a “Not for Profit” Limited Liability Company to be run by a select management team who bring to the table a set of skills, qualifications, high values and experience essential to run an operation of this scale.

As they grew, Kenana Knitters began to run into business growing pains. The cost of stockpiling large orders was detrimental to cashflow, so it was decided to formalize the production and channel client orders to be made on order and within a set delivery timeline. This meant of quantities of stock needed to fill orders did not bankrupt the company. On receiving payment for client shipments the Knitters showed large profits on the books, which needed to be spent before tax deductions. This has been hugely successful in paying for community health care, adult literacy classes, visits from homeopathy experts, opticians and others. Having spent the lions share of profits on benefits, then made provision for future investment, the balance was taxed and given out to the knitters on a pro rata basis as an end of year bonus.

Not all impacts on the surrounding community were seen as positive. Kenana Knitters had to work hard at the beginning NOT to be known as the home-breakers of Njoro.  Women old and young suddenly had an income of their own. In many cases they soon outstripped the earning power of their husbands or fathers.  Young girls sported fancy hairstyles and the latest fashions and started to catch the eyes of some, occasionally married, men.  We now have a code of practice that states that if the money earned from the Knitters is not used positively within the home and community then those who flaunt our values are no longer welcome to earn their money here.  Within the free services, marriage guidance and other counseling was available. This resolved some conflict but where this was ineffective, other women were able to escape abusive situations, having the means to support themselves and their children.  The knitters became a refuge for many.

Kenana Knitters believe that a lot of their success is from their belief in social responsibility and reinforcement of community bonds.  Abiding by health and safety rules and regulations, whilst enabling the ladies to bring their babies and young children to work with them, has been a challenge but well worth the extra effort. As a result of this Kenana Knitters has become a social space where rural women come and work as a community, regardless of tribal boundaries; children run around and play whilst the ladies chat, radios play, phones charge – it is a relaxed and happy working atmosphere.

Many obstacles were overcome and the Knitters continued to grow. Soon another challenge loomed. The sheep in Kenya were unable to grow wool as fast as the demand required. The Knitters became aware of the Chinese Silk Road initiatives with buyers exporting significant amounts of wool to the Eastern markets. Some battles can’t be won, so a deal was struck to get organic cotton from Tanzania, this was dyed and spun to provide the yarn needed and another whole range of products came on line. Not surprisingly the Knitters grew again!

Paddy Nightingale’s dream of helping a few rural women living around the farm to survive hard times has grown beyond her wildest expectations. A retirement project that blew out of control. Kenana Knitters now have over 500 registered knitters, 200 spinners, 14 permanent staff in wool dying, admin and product development, not to mention the wool buyers, shearers, sheep owners and shepherds.

Feel free to visit the Kenana Knitters from Kembu, or check out their website on www.kenanaknitters.com to find a retail outlet near you. 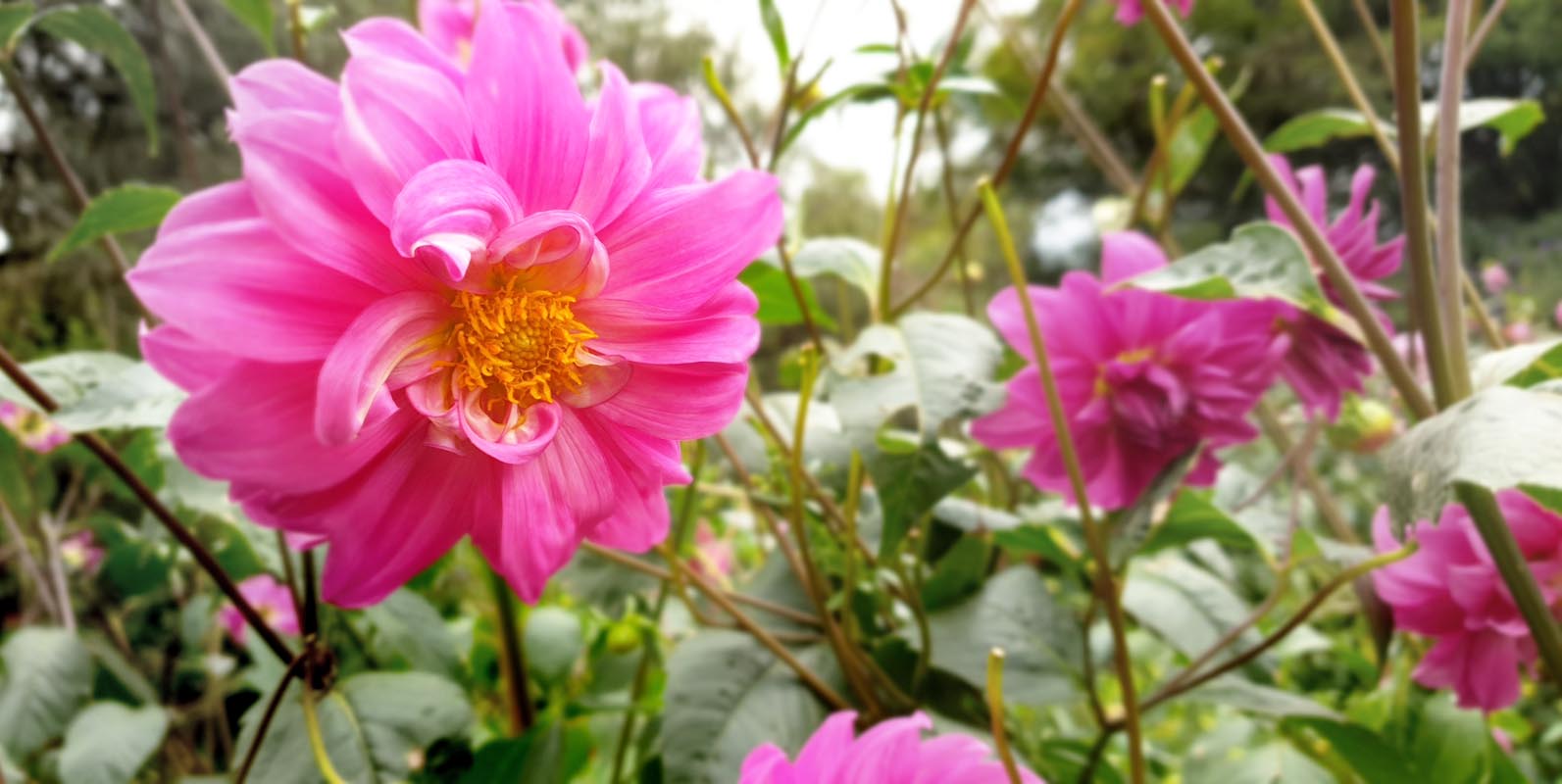 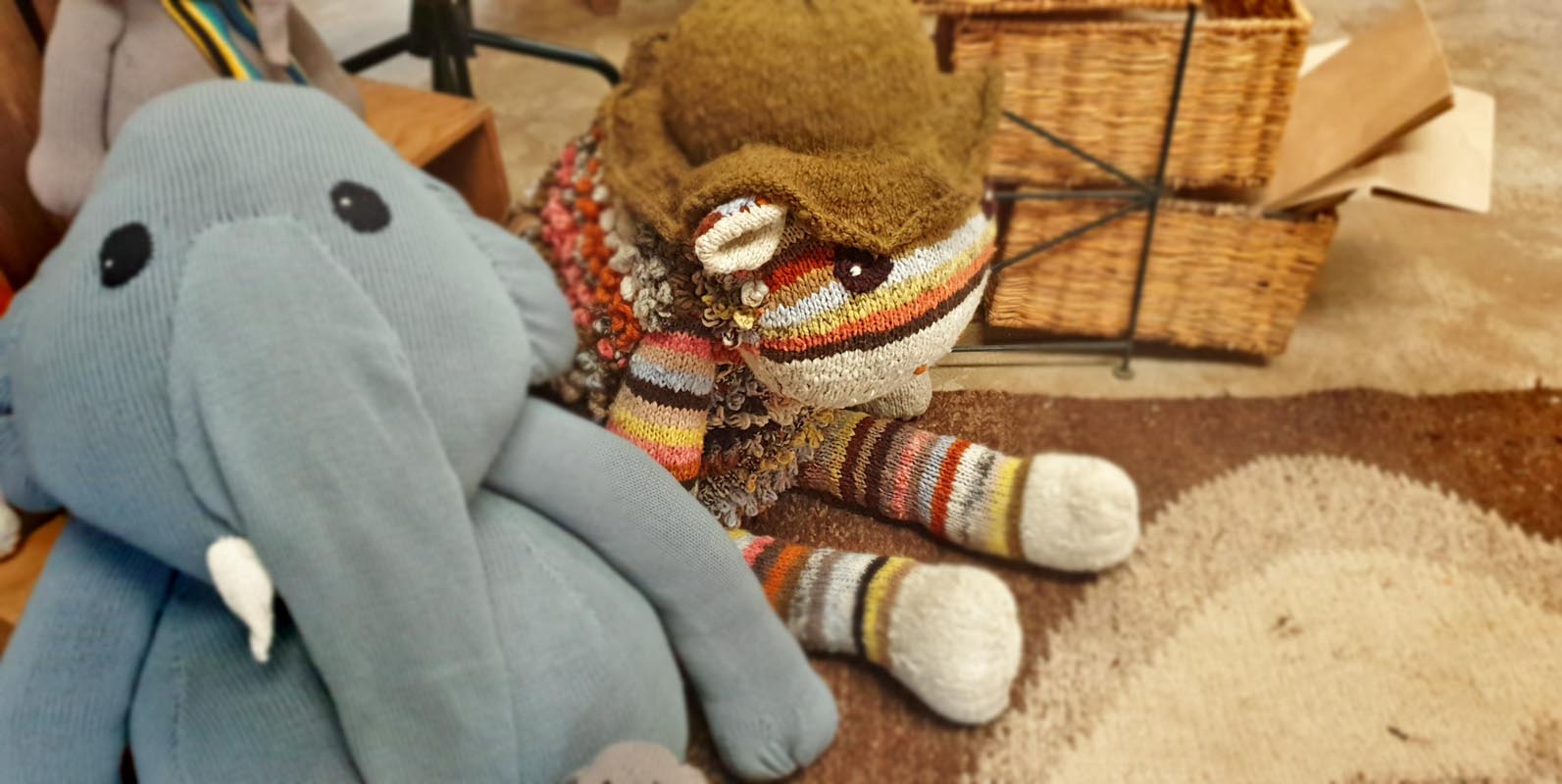 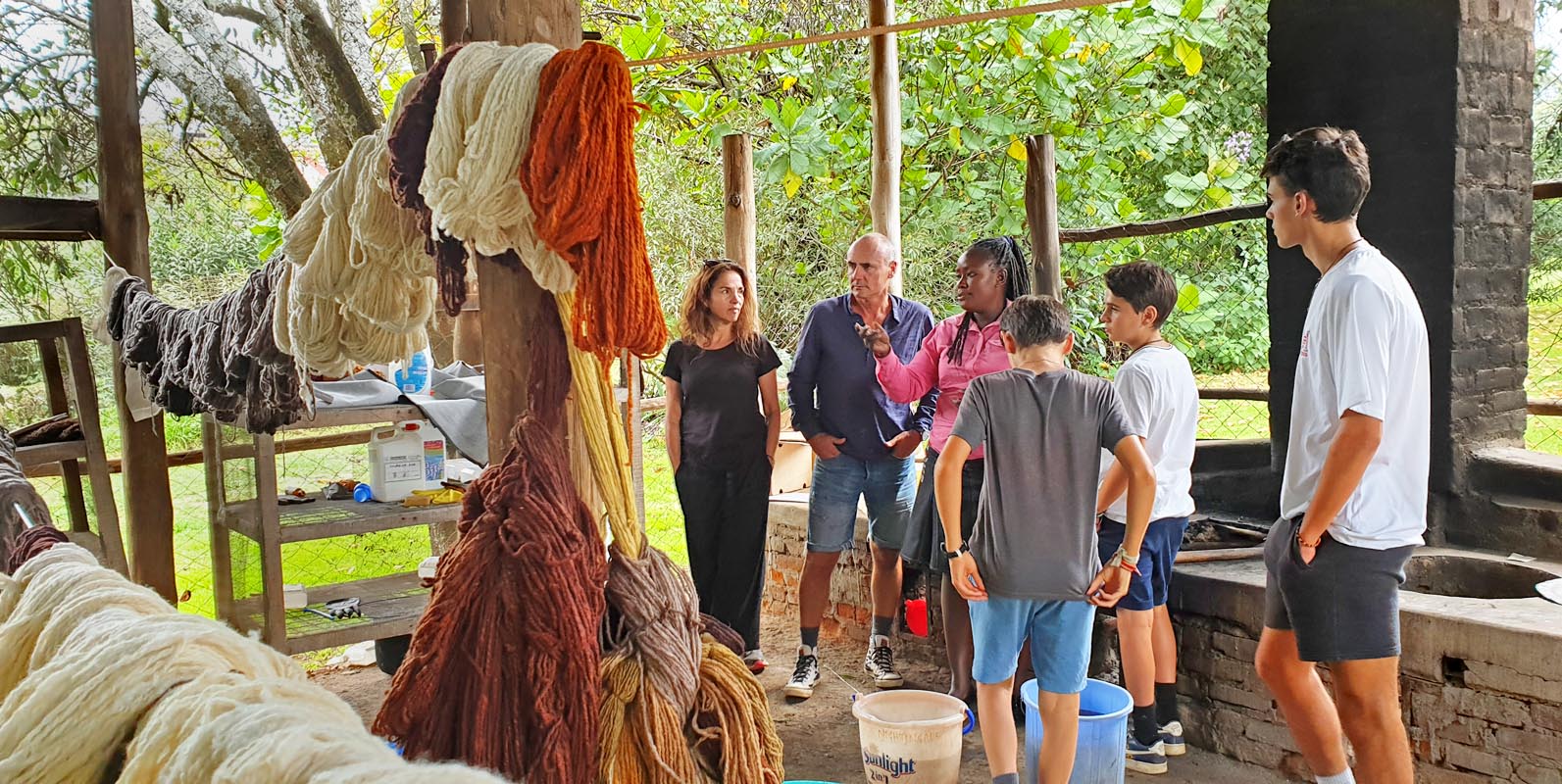 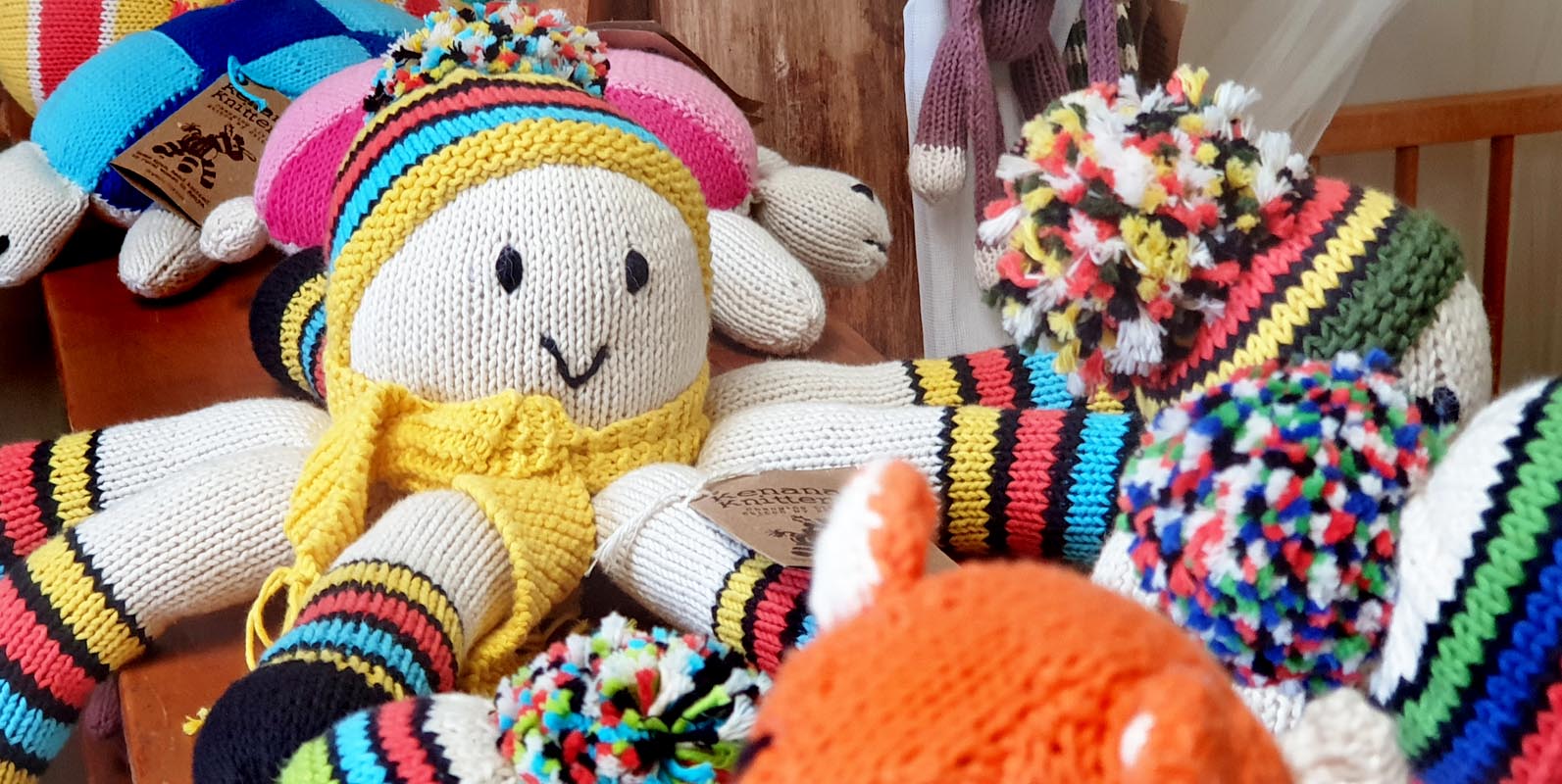 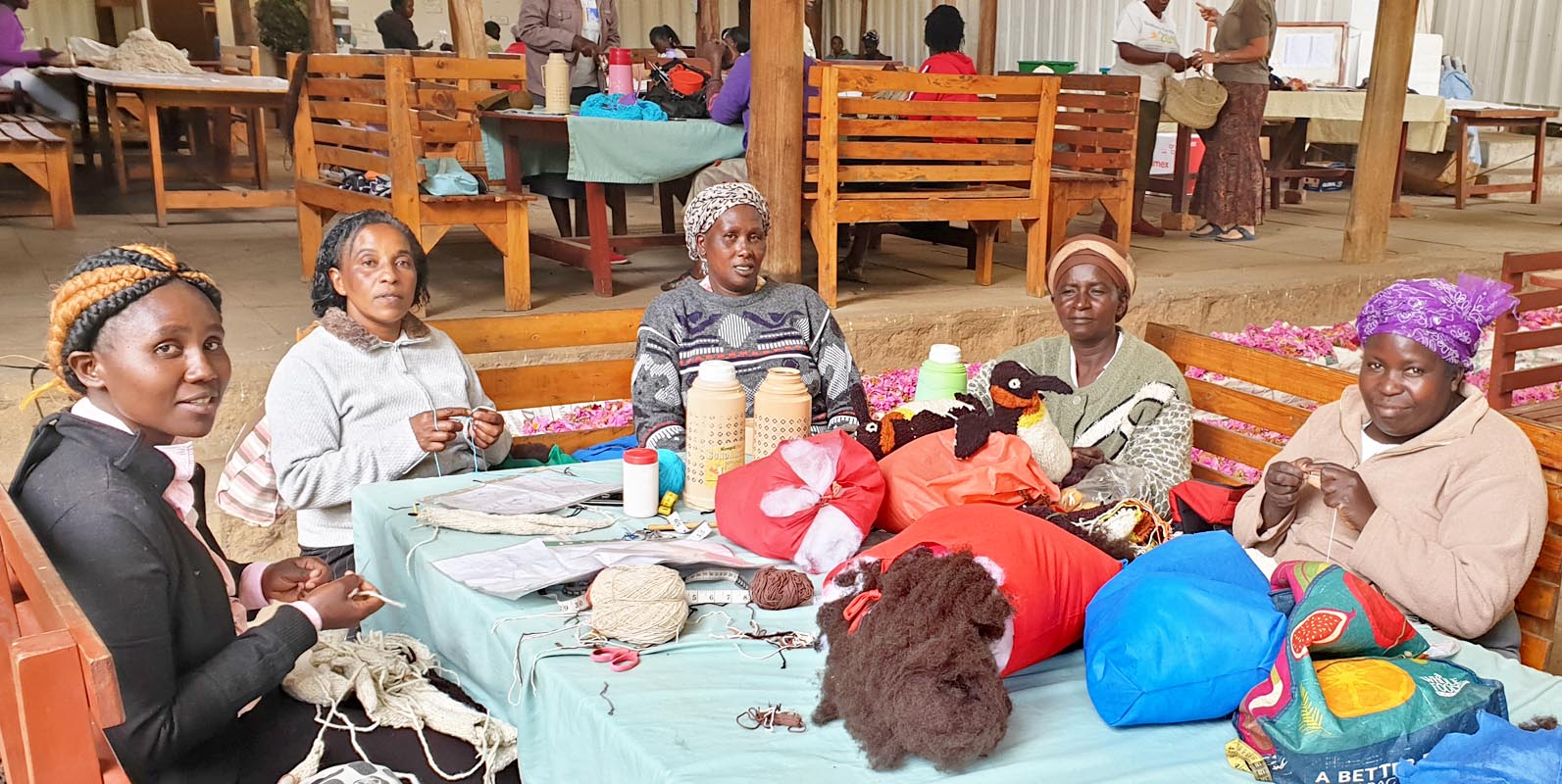 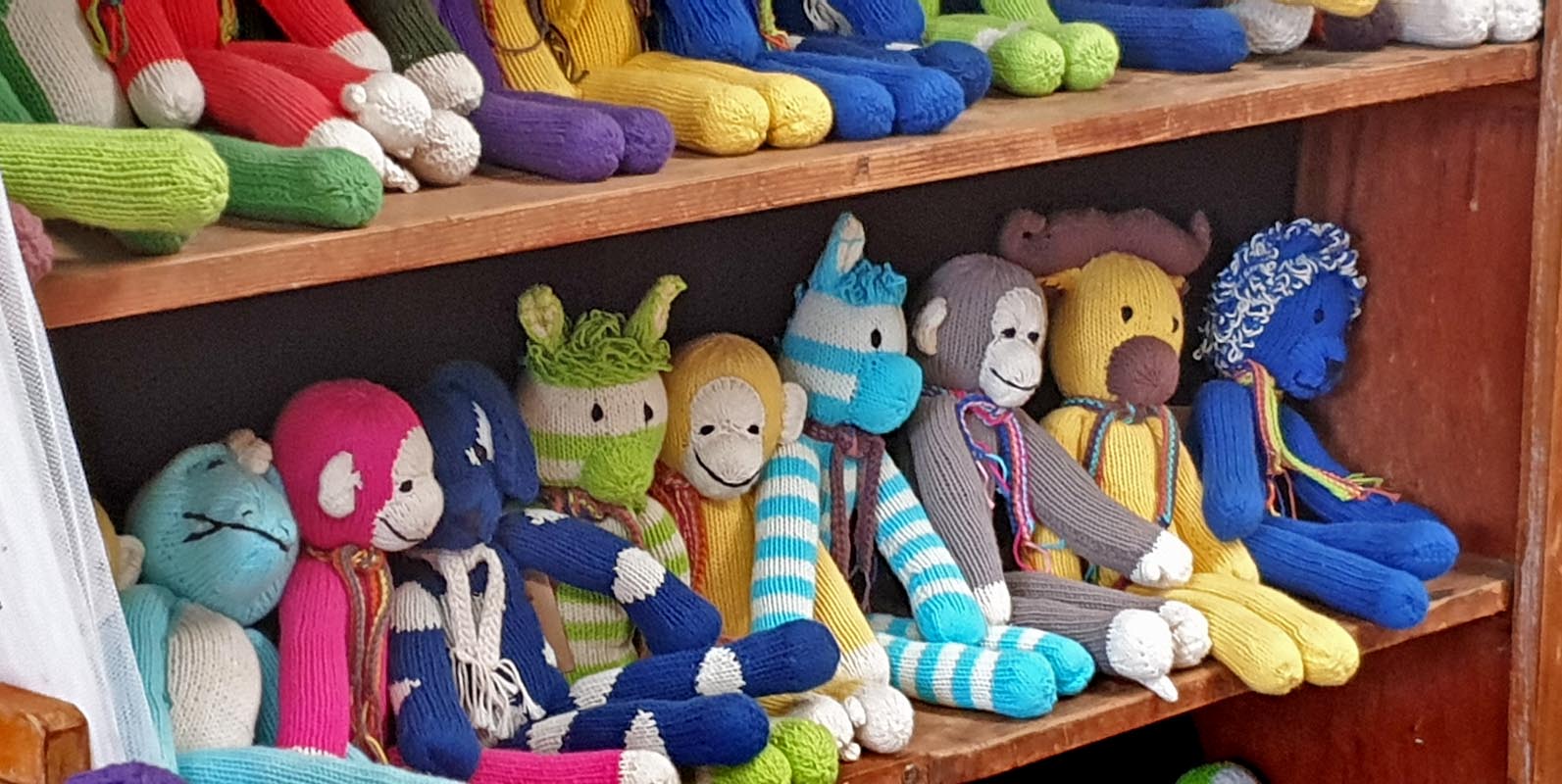 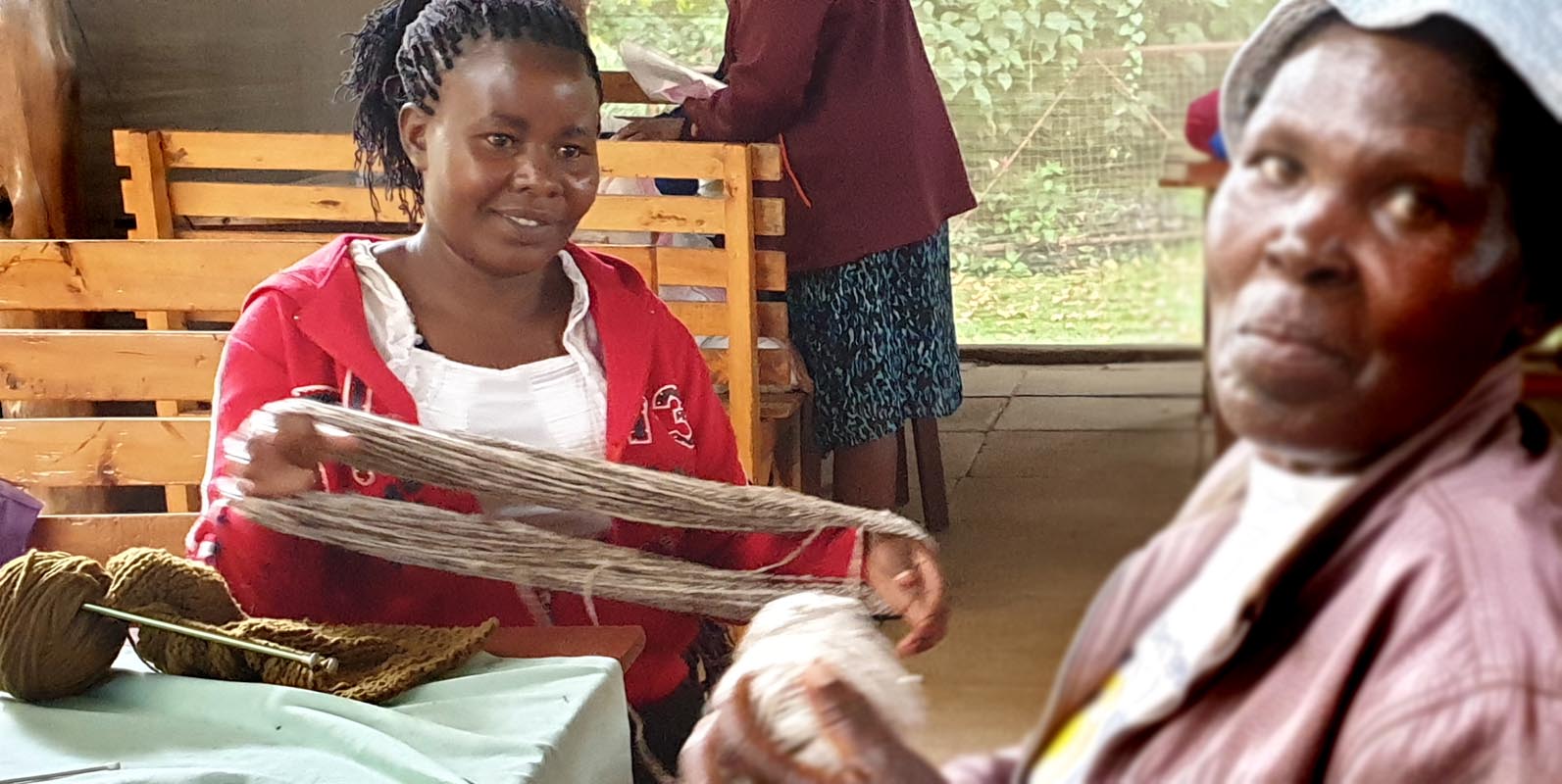 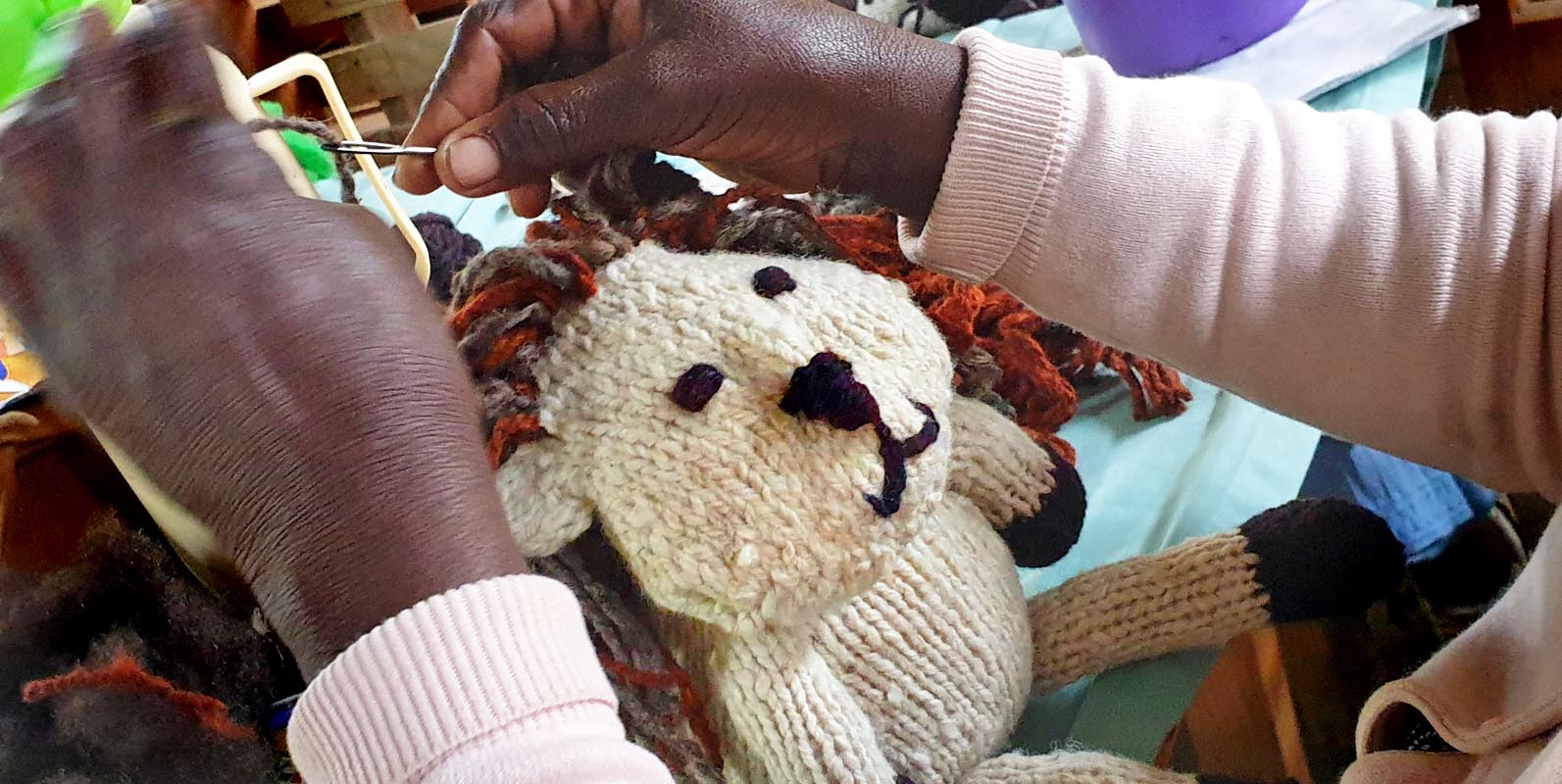 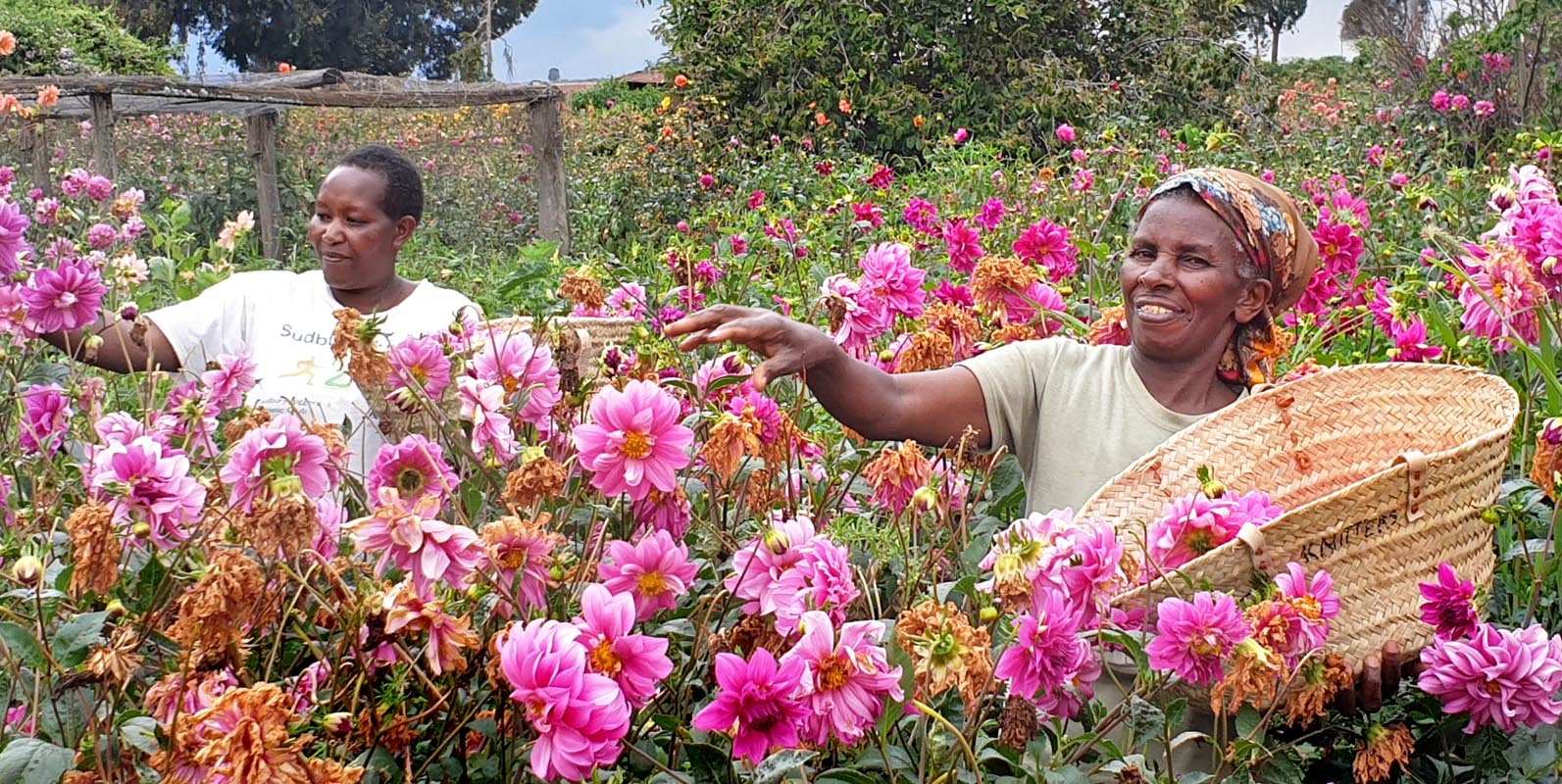